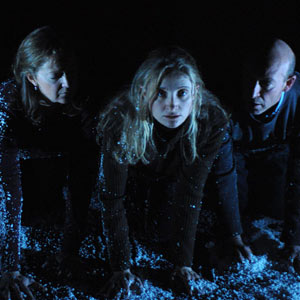 Sarah Kane is almost a figure of myth amongst the theatrical community – and with ample reason. Taking much of her inspiration from Barker’s notion of the catastrophic theatre, she burned into the consciousness of British theatre-goers with her first play Blasted, leaving critics shocked or diffident but audiences intrigued. Her works were raw and jagged, dealing intimately with pain and disconnection, with an almost casual violence – through meticulously carved poetry. Her last play, 4.48 Psychosis, is her shortest work, and is perhaps her most famous given that she ultimately took her own life before the play saw public performance. 4.48 Psychosis is a dense, yet fragmentary text that taxes actors and directors alike, but here Alyson Campbell and Red Stitch have crafted an honest and accomplished rendition for its Melbourne premiere.

The stage is a construct of receding arches, across the floor of which white polystyrene beads are liberally scattered as though the cold wastes of illness have carpeted the interior of the mind. It is a simple, stark design that is lit well and that is a highly evocative metaphor for the paradox of a limit to the infinitude of thought, and the gordian knot of depression. The soundscape is a minimal dirge of occasional squall and creeping oblivion, and is well integrated to the language, which is bleak, unremitting, and expertly handled by the players (Olivia Connelly, Richard Bligh, Tom Davies, and Suzette Williams). It makes the occasional streak of jet black humour all the more piercing, and unnerving.

Campbell has divided the text, which is written as a whole without characters, in such a way as to reflect the universality of the abyss confronted by legions of sufferers. Yet it is done in such a way as to suggest one person’s journey refracted through the mirror of the many, and loses nothing in such a translation. This is not the place to investigate the intricacies of such a journey, nor to speculate on the playwright’s ends and motivations, but to commend this exploration of such a seminal and affecting work. Campbell, who is completing her Phd on Kane’s work, has ably charted the long, dark night of this soul and left audiences with a piece of theatre that fulfils what the stage can be capable of when it is handled with boldness and dedication.