By Rear Windows Ensemble
with Full Tilt
Space 28, Victorian College of the Arts School of Drama 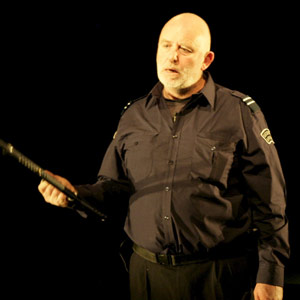 Merfyn Owen in a potent and evocative role

What is at the heart of reality, and what music plays there? What is the shape of memory; the outline of the body or the fissures of the mind? Can one ever escape the past when it is so inextricably linked to the construction of the future? The Inhabited Man, from Rear Windows Ensemble, does not simply touch on these concerns – it takes possession of them, in a work of bold theatrical invention and lasting impact.

The work is a thematic husband to 2003′s The Inhabited Woman, an acclaimed piece that delved into the feminine psyche through a deeply considered fusion of media and performance. It sought to portray the epic struggle that exists at the centre of even the most mundane life, through the dissection of dream and archetype – lover, succubus, mother, goddess, all inhabiting a woman trapped by a life too ordinary. In The Inhabited Man, we see the promised dream as a nightmare of eternal recurrence. What happens when the great templates of the Father, Warrior and Lover are inverted, and a man fails to fit the epic fabric of their cloth?

Leo Bone (Merfyn Owen) is a security guard, whose nightly patrol around a quiet motel gives him all too much opportunity not to reflect upon such concerns, but to be unconsciously haunted by them. A Vietnam vet gravely injured during service, his solitary world is populated only by himself and the memories of his life gone by – comrades killed in the war, the ghosts of his estranged wife and son. Things that could have been said, should have been done, play endlessly over in his mind. Even this unstable world is exploded, however, by the arrival of a foreign man (Adam Pierchalski) and his female companion (Leisa Shelton) to the motel, and suddenly the line between memory and the present blurs as the underlying horrors of a broken life manifest in dreadful fullness.

It is ever a daunting challenge to theatrically portray the complexities of the inner life – how does one give shape to the undefined dimensions of consciousness, particularly when waltzing with madness? Here, as in The Inhabited Woman, it is achieved by a deep understanding of the vocabulary of space and form, and a carefully considered use of mixed media. As Leo begins his opening monologue, a translucent frame descends over him, a single lightbulb illuminating his face as his tale begins. The element of the bulb almost seems to superimpose itself as the burning filament that is his mind. A boat on the Mekong Delta shimmers across the frame, as Leo’s intimate voice breaks all notions of a wall between audience and performer. A larger frame, a chamber almost, is set on a neatly integrated revolve, and becomes something of a nexus of memory – motel room, cafe, the conjugal suite.

However, it is not merely any theatrical device that renders so effective the immersion in such a piece – it would all count for nothing were it not for the accomplished story-telling we are witness to. True, at times it is a barrage of words and dislocating narrative but Richard Murphett’s script is a dense and evocative work, demanding without ever being taxing, and layered with an intricate network of metaphor that conjures snakes, maggots, and tapeworms to flank the beast of the Nine Dragon river delta. Though almost unrelentingly heavy with turmoil, it beats with the rhythm of a carefully broken poetry, and is given powerful life by the central performance of Merfyn Owen as Leo.

Owen’s inhabitation of this most challenging role cannot be faulted. His portrayal is in turn brittle and incandescent, a cyclotron of rage and regret. It has a wry and weary humour that disarms while conceding that escape from the self-created prison is unlikely. Owen is ably accompanied by Pierchalski and Rear Windows co-director Shelton, whose ambiguous pairing add a flowing and vaguely hypnotic physical counterpoint to Leo’s limping frame. It must be said, however, that the ambiguity of their roles is taken somewhat to the extreme. Murphett seems to be pointing to a deeper symbolic function of Leo’s impairment, and there is the transhuman spectre of the cyborg and all its metaphysical implications regarding the flesh being hinted at, but the metaphor appears too submerged. Conflicting interpretations are guaranteed, and perhaps expected.

What cannot pass without mention is the sound. The amplification of the actors has proved a sensible choice – they form part of a far larger audio pattern that is expertly mixed and feels integral to the text. Jethro Woodward demonstrates his skill in composition with Leo’s sung laments proving stand-out moments. His aural construction of a battle in flashback feels frighteningly authentic, and at times there is an undertone of disorienting sound cues as though Leo’s mind is palpable in the space.

Rear Windows states that they want to create imagery that sears itself into the brain. With The Inhabited Man such a thing is possible. Expertly produced and performed, its a complex work that respects and courts the intelligence of its audience.